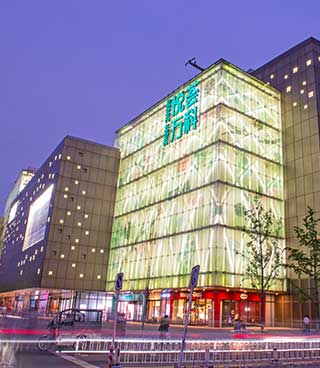 Rapid urbanisation and the growth of China’s millennial population, have transformed retail in the world’s second largest economy1. Recognising the opportunity these changing consumption patterns present for real estate investors, MAM has been a leader in the creation of high-quality retail destinations in China for nearly a decade.

Building on this trend, MAM launched Macquarie China Retail Company in partnership with HIP China Retail in 2011 – aiming to create and curate a diversified portfolio of experiential retail destinations across China. Over six years, MAM sourced and structured over $US1 billion worth of investments, including arranging and refinancing debt and providing co-investment capital. Today, the portfolio’s properties receive more than 8.7 million visitors each year5.

These investments have seen MAM lead the development and renovation of retail projects across five Chinese cities. This has included the design and construction of a greenfield shopping centre which opened to the public in Xi’an in 2018, as well as the complex remodelling of an operating asset housed in an iconic heritage-listed building on Shanghai’s premier shopping strip.

With a focus on the environmental impact and sustainability of the portfolio, MAM is also supporting properties as they invest in energy efficiency measures. This includes replacing existing metal halide lamps in carparks with energy saving LED lighting, adding sensors to escalators to increase energy efficiency, and working closely with tenants to incentivise consumers to reduce plastics and coffee cups through tailored promotions in malls.

Importantly, MAM’s asset managers remain focused on providing international service standards to those who visit its retail destinations. At this stage of development in Chinese cities, there are a significant number of well-located but poorly designed or managed retail properties. MAM is helping to repurpose value-add investments – ensuring that properties provide a relevant offering and safe environment for customers, clients and contractors.

“By combining the skills of the Pradera Retail Asia team and the support of MAM, we’re creating cutting-edge retail destinations for people to visit and enjoy.”