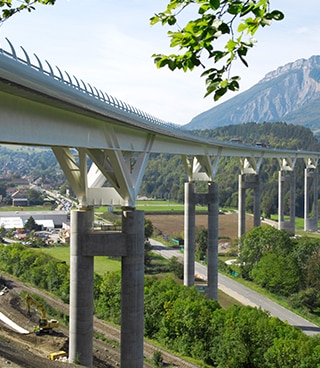 APRR is the fourth largest motorway group in Europe, operating more than 2,300 kilometres of toll roads across France that are relied on by approximately 23 million customers each year1,2.

Recognising the important role APRR’s motorways play in connecting French communities and supply chains, MAM and its co-shareholders supported the business as it developed its network, enhanced safety outcomes, and improved the customer experience.

APRR was established in 1961 to partner with the French State and local authorities in the development, construction, and maintenance of motorways across France. MAM-managed funds made their initial investment in APRR in 2006, before partnering with a co-shareholder to take the business private. In 2012, APRR was successfully delisted from the Euronext Paris exchange.

During MAM’s 14-year association with the business, APRR delivered more than €5 billion of investment to expand and upgrade its network.

MAM supported APRR as it led the development of approximately 200 kilometres of motorway. These works included the A41 north motorway (ADELAC), a key commuter and leisure traffic link between Annecy in eastern France and Geneva in Switzerland, and a project to increase the capacity and safety of Route Centre-Europe Atlantique, a nationally important east-west link connecting Montmarault and Digoin.

Alongside these works, APRR also invested to improve the efficiency and safety of its existing network – widening roads and upgrading service areas. The installation of emergency telephones, as well as safety cameras and sensors, enabled APRR to successfully halve fatalities on its network during the period of MAM’s investment2. Over the same period, health and safety incidents amongst APRR’s workforce fell by a third2.

MAM supported APRR as it implemented a number of initiatives designed to reduce the impact of its network and operations on the natural environment.

In addition to these initiatives, APRR enabled road users to reduce their CO2 emissions by installing approximately 60 electric vehicle charging stations across its network. The business also increased the number of car-pooling car parks along its motorways and replaced its service fleet with electric vehicles.

Initiatives such as these helped APRR reduce its CO2 emissions by more than 10 per cent in the three years prior to MAM’s divestment2.

“APRR plays an essential role in connecting France’s economy and society. We are proud to have contributed to the business through our long-term investment – supporting APPR as it enhanced its offering to customers and supported the development of local communities.”

Focusing on what matters

Throughout MAM’s period of involvement with the business, APRR remained focused on its customers and staff.

The more than 23 million motorists that use APRR’s network each year benefited from the businesses’ commitment to enhancing the customer experience. APRR introduced automatic and non-stop tolling technology across its network to improve ease of use and reduce congestion. Wi-Fi was also made extensively available at the network’s approximately 100 service and 175 rest areas, whilst 24/7 breakdown assistance ensured motorists received support in less than 30 minutes.

APRR understands that an engaged workforce is needed to deliver good customer service and continued product innovation. MAM supported APRR as it fostered a strong organisational culture amongst its more than 3,500 employees – resulting in a low annual staff turnover rate of less than 2.5 per cent2. APRR’s focus on the wellbeing of its workforce saw the business consistently recognised as France’s best employer in the transport sector and celebrated for its efforts to promote diversity and inclusion amongst staff3,4.

All information current as at March 2020, unless otherwise stated.