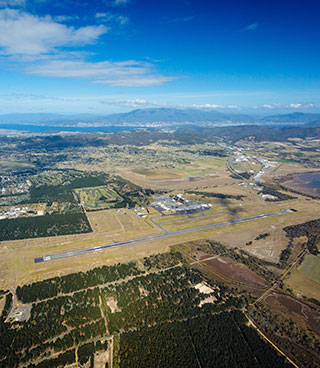 Hobart Airport is a critical piece of infrastructure providing a gateway to Australia’s island state of Tasmania.

MAM and its co-shareholder helped transform the airport over a period of 12 years – supporting the delivery of more than $A150 million of investment to expand capacity and better connect Tasmania’s economy with mainland Australia and the world.

Located off the coast of south eastern Australia, the state of Tasmania has a population of only 535,000 people1. With considerable natural beauty, high quality produce and a thriving arts and culinary scene, the island has long attracted the attention of tourists from mainland Australia and further afield.

Hobart Airport is the primary gateway for domestic and international tourism to the region, with nearly 70 per cent of visitors flying to Tasmania arriving through the airport2. Upon investing in the business in 2007, MAM understood the important role the airport would play in facilitating the growth of the state’s tourism industry.

During the 12 years that MAM managed the business, more than $A150 million was invested to expand Hobart Airport’s capacity and modernise its facilities. These works included a major terminal refurbishment as well as the reconfiguration of the airport’s forecourt to facilitate further expansion.

MAM also supported Hobart Airport in its efforts to develop its route network, with the airport doubling the number of domestic destinations with the addition of flights to the Gold Coast, Adelaide and Perth. With a view to expanding its connectivity, Hobart Airport completed a 500-metre runway extension to accommodate larger aircraft.

These initiatives enabled total annual passengers handled by Hobart Airport to grow by more than 50% – from 1.7 million people in 2008 to over 2.7 million in the year of MAM’s divestment3.

$A150 million invested to upgrade facilities and expand capacity

“During our 12 years of ownership we worked closely with airport management to significantly enhance this essential asset for the people of Tasmania and their visitors, supporting growth in tourism and making an important contribution to the local economy.”

Partnering with the community

Hobart Airport, together with its tenants, generates over 600 full time jobs through its operations3. The airport also makes an important contribution to Tasmania’s economy by facilitating trade and investment in the region.

Agriculture is a major employer in Tasmania and the largest component of its economy. The island’s pristine environment and excellent growing conditions have seen its fresh seafood, dairy, meat, fruit and vegetables gain interest from consumers around the world. To grow the sector’s export capacity, MAM supported Hobart Airport as it expanded its freight facilities. This initiative resulted in the development of a 6,000m2 freight forwarding and cold storage facility, which has enabled producers to bypass complex road and sea trade links to ship fresh produce directly to domestic and international markets.

Following 12 years of MAM stewardship, it was estimated that Hobart Airport contributed more than $A150 million in added economic value to the Tasmanian economy each year4.

All information current as at May 2020, unless otherwise stated.

1 As at 30 September 2019, Australian Bureau of Statistics