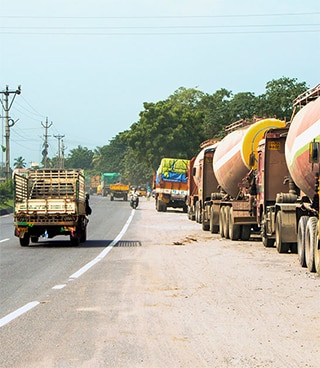 MAM-managed funds began investing in Indian roads in 2013. As it became the largest infrastructure asset manager in the sector, the biggest challenge for MAM was improving the road safety culture in India.

India has the world’s second largest road network and has quickly grown to become the world’s fourth-largest automotive market1,2. As access to personal mobility has risen, so too have accidents involving the country’s most vulnerable road users – pedestrians, motorcyclists and cyclists3. MAM’s asset managers have focused acutely on improving the safety environment for the people working and driving on their roads, and for the communities living near them.

MAM has established safety training and awareness programmes for road workers and engaged extensively with police and local authorities to enforce speed and lane restrictions in work zones.

Partnering with concession authorities to implement the initiatives, MAM has also invested to build fence barriers and chicanes and pioneered ‘first-in-sector’ initiatives like robotic flagmen and mobile safety vehicles.

These initiatives have supported broad improvements to safety standards on India’s highways, and have helped the assets in which MAM manages controlling stakes achieve 14 million safe ‘man hours’4. Other investors are now rolling-out health and safety systems and practices originally demonstrated on MAM’s road investments.

In partnership with the Macquarie Group Foundation, MAM’s Mumbai team launched the ‘Let there be Light’ initiative in 2015. On a stretch of high-speed highway near Hyderabad Airport, the initiative helped improve visibility along access routes and at intersections with the installation of new solar lights. The area previously had little lighting – posing a risk to the many people living on its fringes.

MAM has also supported initiatives to create greater awareness of safe driving practices amongst road users. This has included a dedicated programme for truck drivers to foster cultural changes within India’s logistics sector.